A Legacy of Historic Preservation 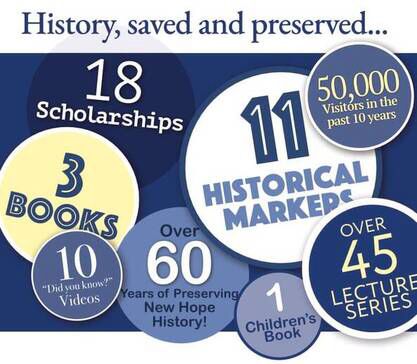 Benjamin Parry is known as the “Father of New Hope”. When he named his flour mill, New Hope Flour Mill, the name, New Hope, later replaced the town’s former name, Coryell’s Ferry in 1837. Parry was a community leader in the late 18th and early 19th Centuries, spurring commerce and industry in New Hope for nearly half a century.

Discover our fascinating history with a Walking Tour of downtown New Hope!
Take our expertly guided walking tour to see the places and hear the tales that make New Hope such a fascinating place. The tour is approximately one mile long and lasts about one hour. Tours meet at The Parry Mansion Museum.  $10 per person.

The New Hope Historical Society has over 500 members from the area and a Board comprised of local business executives and luminaries who care about New Hope's rich history. Membership is less than a night out on the town and the rewards are year long! Please join us!

Sunset Cocktail Reception at The River House at Odette’s

Thanks For Your Support!